Put people first to win the battle against COVID-19 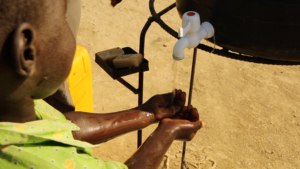 The ancient Spanish port city of A Coruña has a fascinating history – one which contains many parallels with our present fight against a global pandemic. In fact, the city shares its name with the virus that currently poses a threat to health and wellbeing worldwide: ‘Coruña’ derives from the Galician word for crown, ‘coroa’.

A Coruña is renowned for its lighthouse which reputedly dates back to the 2nd century AD. The UNESCO World Heritage Site boasts an iconic sculpture shaped like a flame. And the sculpture was erected in honour of 22 orphan children who served as live carriers of the smallpox vaccine, travelling from Spain to its colonies in the Americas and Asia in the early 19th century.

The dreaded smallpox virus killed as many as 30 per cent of people infected. In 1798, the Spanish court of King Charles IV had lost many prominent members to the disease – and news of a vaccine developed by English physician Edward Jenner spurred the king into action. Charles IV decided to take the vaccine to the Spanish territories in Asia and the Americas; and so in November 1803 an expedition set sail from A Coruña to the New World.

In the era before refrigeration, it was very difficult to keep a vaccine live for long periods, so the royal expedition developed a solution. Among the passengers were 22 orphaned children who had been inoculated with the less virulent live cowpox virus – a virus capable of generating an immune response to the smallpox virus.

As the ship sailed across the Atlantic children were inoculated in pairs, allowing time for each of them to recover, thereby passing on the vesicle fluid containing the virus among them. The expedition made its way to New Granada (or what is now known as Colombia, Venezuela, Ecuador and Panama), Central America, and the Philippines before branching out to South America and later China, setting up local systems for mass vaccination.

Live vaccine carriers would, of course, not pass today’s ethical and safety standards. Yet, the A Coruña event still serves to symbolise global enterprise and innovation.

A number of rich countries are stockpiling more coronavirus vaccines than their populations need. This could put vaccines out of reach for low- and middle-income countries

Today, the hope offered by the new COVID-19 vaccines and a global commitment to fight the disease is tempered by three challenges: the loss of livelihoods and the prospect of starvation facing many people; vaccine hoarding by nation-states; and an absence of responsible leadership.

A crisis presents us with choices. I have worked most of my professional life in humanitarian crisis settings where people are confronted by forces of nature, climate fury, mobs, military violence and microbes. Survivors and volunteer relief workers in such settings have taught me invaluable life lessons about the true meaning of humanity – where the best actions are selfless, compassionate and collaborative. The noble work of frontline health care and humanitarian workers during this pandemic is a living example of these humane values.

The most important threat we face today in the wake of the pandemic is the potential loss of livelihoods and disruption of food systems. Some 270 million people worldwide are on the brink of starvation, with experts predicting future famines. The UN World Food Programme predicts that “2021 is literally going to be catastrophic”.

Lockdowns, suspended jobs and loss of agricultural produce will accelerate this potential crisis. Without urgent action, an entire generation will feel its impact – particularly the world’s children. Children are the hidden victims. Lockdown measures to combat the spread of the COVID-19 virus severely limit children’s movement and they miss out nutritious schools meals- and as many as 1.5 billion children are currently out of school as a direct result.

Hoarding medicines and bypassing COVAX will prolong the pandemic and lockdown measures, amplify trauma, human and economic suffering and keep a whole generation of children in poor countries out of school

The second threat is ‘vaccine nationalism’. A number of rich countries are stockpiling more coronavirus vaccines than their populations need. This could put vaccines out of reach for low- and middle-income countries. The World Health Organization (WHO) estimates that more than 39 million doses of vaccine have now been administered in at least 49 higher-income countries. Contrast this with the dismal 25 doses available in one of the lowest-income countries.

Simply put, some rich countries are deploying their financial might and political clout to jump the line and hoard vaccines, in effect driving up vaccine prices. This will have a catastrophic impact for millions of people, particularly those living with the effects of humanitarian crisis.

The People’s Vaccine Alliance – a coalition of organisations and activists backed by past and present world leaders, health experts, faith leaders and economists – warn that nine out of ten people in low- and middle-income countries are set to miss out on COVID-19 vaccines unless urgent action is taken by governments and the pharmaceutical industry to make sure sufficient doses are produced.

Upholding equitable access to essential vaccines and healthcare is a formidable challenge in any humanitarian setting – and is more difficult still in the midst of a pandemic. To win this battle, it is critical that people amid the effects of armed conflict and humanitarian crisis are not left behind. It is a moral imperative to ensure vaccines are available to all; and it is also in the interests of rich nations to make this happen. After all, the COVID-19 pandemic won’t be over for anyone until it is over for everyone.

The third challenge is a clear lack of moral leadership. WHO Director-General Tedros Adhanom has stated that “the world is on the brink of a catastrophic moral failure.” In his address, he criticised rich countries that apparently show no regard for others: “The price of this failure will be paid with lives and livelihoods in the world’s poorest countries”.

A global crisis is a litmus test for world leaders and the decisions they take reveal their true intentions. A key theme of Camus’s 1947 novel The Plague is that “the pestilence is at once blight and revelation; it brings the hidden truth of a corrupt world to the surface.”

Hoarding medicines and bypassing COVAX – an initiative under the WHO’s leadership to ensure vaccine equity – will prolong the pandemic and lockdown measures, amplify trauma, human and economic suffering and keep a whole generation of children in poor countries out of school, depriving them of their only opportunity to build a better future for themselves.

Pharmaceutical corporations developing COVID-19 vaccines must openly share their technology and intellectual property through the WHO to ensure safe and effective vaccines can be made available to all who need them.

We must hope that the current global crisis will provide an opportunity for world leaders to see humanity from a new perspective. Their decisions could help to make the world a more compassionate, peaceful, healthy and just place.

The Sphere Handbook on humanitarian assistance provides directions to navigate the moral crisis we are facing today. The Humanitarian Charter insists on putting people and their dignity first, respect rights and address their humanitarian needs. In a series of conferences organised by  Sphere last year to analyse the human and humanitarian dimensions of the pandemic, experts reiterated the importance of putting the most vulnerable and poor people first in crisis settings.

The opportunity to provide the world with hope is there for us to take.

Dr Unni Krishnan is Humanitarian Director of War Child. Previously, Dr Krishnan worked as the Chair of the Sphere Executive Committee and as a lead author of the Health Chapter of the Sphere Handbook. War Child dreams that no child should be part of war. Ever. And we are daring enough to believe dreams can come true. War Child supports the People’s Vaccine Alliance.

Subscribe
We use cookies to ensure that we give you the best experience on our website. If you continue to use this site we will assume that you are happy with it.Ok