When Sphere brings the private and humanitarian sectors together: the case of Sri Lanka 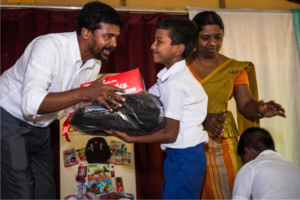 Firzan Hasmim delivers school supplies to Pitabeddara students who lost them during the 2017 floods and landslides. Photo: A-PAD Sri Lanka.

Firzan Hashim is the Sri Lanka Country Director for the Asia-Pacific Alliance for Disaster Management, a trans-national platform that coordinates the work of governments, private companies and NGOs in the event of humanitarian crises. A long-time Sphere advocate, he was formerly a Sphere focal point representative as the Deputy Director of Sri Lanka’s Consortium of Humanitarian Agencies (currently known as the Centre for Humanitarian Affairs – CHA).

In this interview, Firzan explains why collaborating with the private sector can have a positive impact on the quality of humanitarian response and how the Sphere standards play an important role in bringing different sectors together.

Your organisation, the Asia-Pacific Alliance for Disaster Management (A-PAD), coordinates the work of humanitarian responders from very different sectors. How do you manage to create positive collaborations?

People in Sri Lanka are historically keen on helping each other. We even have a word, shramadana, to describe the time and effort put in to provide assistance to others, build better villages and create services. This is probably why in recent years many Sri Lankans companies stepped up to get involved in humanitarian response.

During the 2016-2017 floods, for instance, most of the immediate assistance came from individuals and the private sector. There was very little coordination between the responders, though. People would go to supermarkets and just pick up what they thought was needed, with most of the resources ending up wasted or piling up in some local government authority’s office. Those who really needed support would not get any.

We tried to create a win-win situation for all those involved. Humanitarian agencies need suppliers because they can’t produce food, kits or other items; companies are interested in improving their public image, implementing Corporate Social Responsibility projects, or making their brand more visible.

That’s why the Asia-Pacific Alliance was created as a coordination platform. Over the years, we used the Sphere Handbook to show responders that there are ways to work together better and humanitarian standards to follow: we figured humanitarian action would be a lot more effective if all the organisations participating in the response, including those outside of the humanitarian sector, were familiar with the Sphere standards. We created assistance kits based on the Handbook’s recommendations and had them approved by governmental authorities as part of the national guidelines. We also trained first responders to apply the standards. Private-sector companies are now aware that international guidance exists to promote people’s dignity, and this really has an impact on our coordination efforts.

Private sector organisations don’t speak the same “language” as humanitarian actors. Does this create challenges during a joint response?

If we don’t “speak the same language”, the fault is also with us humanitarians. We have been jealously keeping our standards and frameworks within the sector; of course other organisations are unaware of them when they participate in the response.

For instance: we once needed to provide water for people displaced in a camp. Private-sector responders proposed to install water pumps and tanks in a certain way. We could have simply argued that the humanitarian sector does things differently; instead, we used the Handbook’s Protection Principles to discuss the risks of harassment and violence that some people (especially women) face when they go fetch firewood and water, and we argued that water tanks needed to be much closer to their homes. Companies agreed that protecting the communities would be the most important thing; some adapted to our system, others proposed to fund our response so we could follow these best practices.

Another example is food assistance. Together with the World Food Program, we calculated the calories a family needs during a crisis, as recommended by the Sphere standards. We put together a food package based on what is available on the Sri Lankan market and had it validated by governmental authorities. We then reached out to food companies, explaining what kind of packages humanitarian agencies would be interested in buying from them and why. Companies became aware of what is contained in a standard three-day ration. This kind of communication is important.

How did you manage to bring together a sector that should provide impartial assistance based on the principle of humanity and one that ultimately needs to make a profit out of the collaboration?

We tried to create a win-win situation for all those involved. Humanitarian agencies need suppliers because they can’t produce food, kits or other items; companies are interested in improving their public image, implementing Corporate Social Responsibility projects, or making their brand more visible.

During the conflict, for instance, we needed to send foreign remittances to people in remote areas with no access to banking. One Sri Lankan bank took the risk and opened a branch in a hostile area during the ceasefire period. When peacetime came, many of the local people – who already recognised the logo – decided to open an account and become customers.

If we don’t “speak the same language”, the fault is also with us humanitarians. We have been jealously keeping our standards and frameworks within the sector; of course other organisations are unaware of them when they participate in the response.

On another occasion, humanitarian agencies responding to a major flood needed to immediately provide food rations to some 2,000 affected families in a remote town. The usual contractor, however, would take at least three days to deliver the food packs to the area. Through the Asia-Pacific Alliance, the humanitarian agency connected with a large Sri Lankan supermarket chain that has outlets all around the country; the food packages were delivered in four hours. The company wanted to be seen as a response partner rather than a supplier, so they didn’t charge for transport or packing and participated in distributing the packs.

The Handbook and its guidance should be accessible and relevant to any sector; not just humanitarian agencies, but also companies, service providers, networks, and other funders. All sectors are connected: if private companies struggle during a humanitarian crisis, the country’s economy and the people will struggle as well (just as it happened with the 2019 Easter bombings in Sri Lanka, which impacted tourism very negatively and caused the loss of many jobs). Of course, there are challenges and a lot must be done in terms of increasing awareness, engaging different actors and ensuring the continuity of the funding. However, there is also a lot of room for collaboration across sectors and many positive examples.